From playdf - wiki
Jump to navigation Jump to search

When you kill your opponents, you get rating points, which are calculated according to the following formula:

If you kill an opponent while in a party, the number of rating points received will depend on the character with the highest rating points in your party.

When you die, you lose rating points. You will not get rating points if your opponent's rating is 300 less than yours.

Every Monday and Friday at 00:01 rating points are reset. The top 3 players receive an reward via Rodex mail.

These hats will expire in 4 days.

The top 1 player additionally gets the Costume Top Player Hat for 4 days. 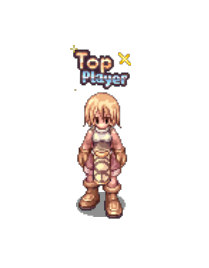 Also a statue will be installed in Trinity City in honour of the player who ranked first.

When you kill opponents, you also get a PvP Badge. PvP Badges can be exchanged for Ranked PvP Arena Box at Ranked Arena NPC.

You can obtain the following items from Ranked PvP Arena Box:

You can only get a PvP Badge once in a certain period of time, which depends on your rating points:

You can't get a PvP Badge if your opponent's rating is 300 less than yours.